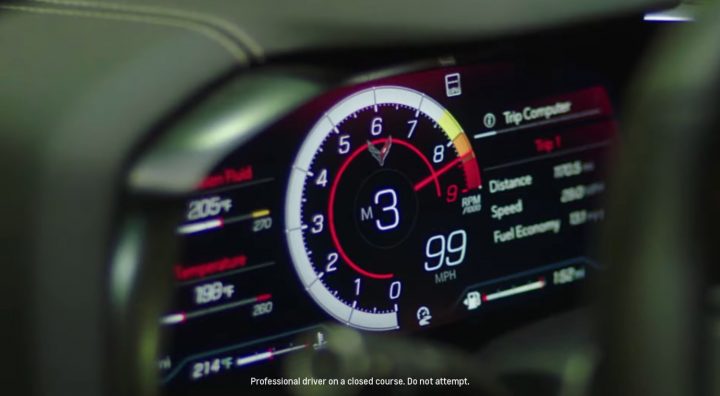 The all-new 2023 Chevy Corvette Z06 is scheduled to debut next Tuesday, October 26th in a new 30-minute video titled “Putting the World on Notice.” The latest teaser video for the upcoming debut shows a few interesting tidbits ahead of the official reveal. One of the more interesting bits is the engine redline, which looks to be set at 8,600 rpm.

Of course, this isn’t official confirmation of the 2023 Corvette Z06 redline, but it does seem like a pretty strong hint as to what we can expect.

The debut video will feature professional basketball player and gold medal-winner Devin Booker, as well YouTube superstar and performance driver Emelia Hartford, both of whom will dive into the development process behind the new go-faster mid-engine ‘Vette with some of GM’s engineers and designers.

The 2023 Chevy Corvette Z06’s naturally aspirated 5.5L V8 LT6 is based on the same V8 found in the Corvette C8.R race car, and features a flat-plane crank, dual overhead cams, and an exotic-sounding exhaust note. Output is expected to hit around 615 horsepower and 500 pound-feet of torque.

Watch the reveal on Tuesday October 26th from the Chevrolet website: https://www.chevrolet.com/upcoming-vehicles/2023-corvette-z06